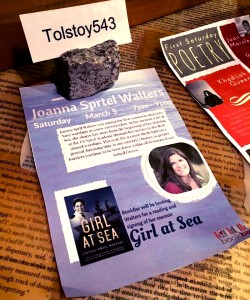 As many of you may know, I recently did an author event for Girl At Sea at Denver’s Book Bar in the beginning of March.  If you haven’t been to the Book Bar in Denver’s trendy Highlands, you need to check it out because the owner, Nicole Sullivan, has created a very special environment indeed.  The Book Bar was ranked in Men’s Health as one of the top 10 wine bars in the country, not to mention the great food and warm family environment.  I was very excited to share my story with the Book Bar’s patrons and was scheduled to go after the Saturday night poetry reading.

In preparation for the event, I invited virtually everyone that I knew.  The evening went smoothly for me and I felt that I was really able to reach people with my message.  As I glanced out to the crowd, I saw many fa

miliar and new faces alike.  After the presentation, I settled in to signing people’s books, answering questions and getting to know them.  I found myself deep into conversation with a woman who split her time between Cape Cod and the Denver area.  Her name was Beth and she was incredibly open, warm and classy.  Beth was very well-read and full of great ideas on how to get the word out about Girl At Sea.  She talked about how I should strongly consider doing a book signing tour of the East Coast.  As she was making recommendations for me of all the stores that I should visit, someone jumped out from behind Beth and happily said “I made it!”

I had only a split second to look up, smile and quickly say “So great to see you!  Thank you very much for coming.”  But when I looked up, it was very hard at first for me to recognize the person in front of me.  She had shoulder length curly hair, light makeup, a mint green light chiffon shirt with a black sparkly hoody and tight jeans.  I recognized the warm brown eyes and smile to be from an old boyfriend, Brendan.  While my mouth was having a very thoughtful conversation with Beth, my mind was having an entirely different conversation with itself.  It took me a while to realize what just happened and exactly who had been standing in front of me.

BRENDAN had been standing in front of me!  We had texted before the event and he said that he was definitely going to be able to make this event since he couldn’t quite make the last Boulder Book Store reading.  My head flitted between “DON’T SKIP A BEAT…But… he had a bra on.. and a soft, thin mint green blouse…DON’T SKIP A BEAT.. and was that makeup?! DON’T SKIP A BEAT…”  It took everything I had to not drop my jaw and openly stare at him…errrr…her.  I kept talking to Beth and seemed to not skip a beat in the conversation, though my head was spinning.  She sat in a nearby chair and waited for her turn to talk to me.  I was acutely aware of her presence.

Beth and I concluded our conversation rather quickly and agreed to meetup in the next couple of weeks.  She had no idea what had just happened and the shocking news I was trying to digest.  As soon as Beth stood up and left, “Brendan” walked over to the table and said that she was now Brenda.  I honestly had no idea how to react.  I quickly switched between being filled with curious questions and mentally reviewing our relationship and tie together.  I kept bumping into the thought that HE had been THERE…and now HE was a SHE.  All of this took mere moments to happen in my head.

We sat there for a few minutes and quietly talked.  I awkwardly asked questions about everything from how she was to when she figured out that this was what she wanted to be.  Eventually, we made our way to my friend’s table and began to visit.

Although I will admit, it was a little awkward when my girlfriend piped up and happily said “Brenda, how did you and Joanna meet?”

I looked at her a 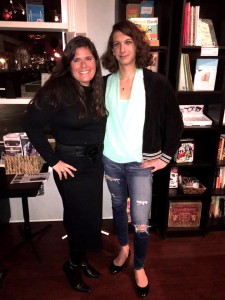 nd asked, “Would you like to tell her, Brenda or shall I?”

She said “I think you should tell her.”

My face turned several shades of pink as I said “I used to date him.”
The shock of the conversation died down and I quickly realized that people are just people… and it really doesn’t matter if Brendan became Brenda as long as she’s happy and living true to her heart.  I will never forget the evening for many reasons, but Brenda’s reveal likely trumped my book reading.