This year for spring break, my girls and I decided to take a spontaneous road trip.  We were “considering” doing the long drive to the Grand Canyon, but with needing to be back by Wednesday, thought we’d end up spending more time in the car than on a trail.  Instead, we opted to head south towards Santa Fe, New Mexico taking stops along the way.

Being a divorced family with split time between mom and dad, I picked the kids up from school Friday afternoon and it was time to PACK!  The weather changed dramatically and a big heavy snow storm rolled in through the night.   As we left early Saturday morning, we all were wondering what we were in for on the roads.  As we wound our way through highway 285, the clouds parted and we were in for a treat of an amazing blue sky Colorado day–such a sharp contrast to the snow we faced earlier!

Our first big stop was to the Great Sand Dunes National Park and Preserve in the southern part of the state just north of Alamosa and the New Mexico Border.  As we got closer, we could see a bright rolling mass among the jagged evergreen mountainside to our left.  Ali, my ten year old, spotted it first and excitedly said “Mom, I believe it’s there!”  Thanks to Ali, we were able to enter the park for free with the White House “Every Kid In A Park” initiative for 4th graders around the country.

My 12 year old, Ella, had been filled with a bit of tween angst and began the day with saying that she wasn’t so excited about doing a hike.  Luckily, that quickly dissipated as she saw the grand peaks of the sand dunes in front of us.  We decided to head straight up to the top together.  After coming off of two pretty major surgeries to my right leg (Surgery #1 Oct 20th:  Achilles Tendon repair, tendon above Achilles Lengthened and ligaments into ankle tightened; Surgery #2 Dec 1st:  hip labral and impingement repair), hiking to the top of the sand dunes proved to be VERY challenging for me.  In fact, this was the first time ever that my girls were out in front and had to wait for and encourage ME.

I could hear the many things that I’ve said to them over the years come out of their sweet mouths back to me.  “Come on, mom!  You’ve got this.  You can do it!”  Ella ran out in front and scouted the best path with Ali close behind.  The very last few steps onto the steepest region were exhausting for me as I hauled my body to the top.

Once we got to the top, we sand glissaded down the dune.  Perhaps next time, we’ll bring sand boards to enjoy the exhilarating ride back down.  This time, I don’t think that I could have dragged it all the way up there!

We were all pretty hungry and tired when we made our way back to the car and enjoyed a healthy lunch in the camping area.  Much to Ella’s chagrin, this was probably one of the first trips that I didn’t have lodging precisely planned out before we left.  She’s a kid who likes to have things planned out.  It drives her crazy sometimes to have such a free spirited mom and sister.  After narrowing down the remaining Airbnb places, we decided upon a small, quaint little “tower” nestled on a famous garlic farm in a small town called Dixon about an hour from Santa Fe.

Before heading down to our next destination, we found our way to the Valley View Hot Springs and Nature Sanctuary.  One thing to note is that clothing is optional at this particular venue.  I figured that the girls and I would wear our suits and hike to the further hot springs where hopefully nobody was naked.  Everyone was i 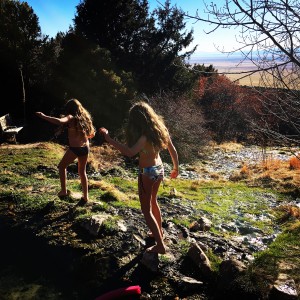 ncredibly nice (and clothed!) as we checked in and picked up our maps.  We all were looking forward to relaxing in the warm water.  As we began to hike up the trail, an older woman in her 60s took off her top exposing her massive bosom just to the left of us.  Ali kind of chuckled and Ella picked up her pace determined to get to the natural hot spring without seeing any MORE naked people.  I did my best to explain to them that bodies are just bodies fumbling with something like “in Europe, it’s common for EVERYONE to be topless at the beach.”  Mother-nature provided a visual feast for us as the sun was dropping late in the afternoon.  The further little pond didn’t disappoint and both girls really seemed to love the place.

On the way down, the girls went into the bigger pool which seemed to be abandoned while I went into the hottest pool.  As I approached, I noticed that there must have 8 men in the little pool and 2 women..  Everyone was naked with the exception of me.  It was liberating to have open conversation with a bunch of naked people without copping a stare at their parts.  After a while, my hyper awareness of their nakedness faded and I just enjoyed the quiet conversation.  That is, until Ali started walking over wanting to get into the hot pool.  I immediately got out and flagged her off hoping to shield her view of 8 different men.  Crisis averted!  She seemed unscathed and off we went.  We all made it back to the car with broadened horizons and an appreciation for just how spectacular our home state is.

We toweled off, put our clothes back on and began the last leg of our journey for the day which would entail another 4 hours of driving.  The sunset was spectacular as we headed out of Colorado and into Northern New Mexico.  Ella was helping me to navigate while Ali was in the back.  We enjoyed good conversation and amazing views of wide-open spaces…until apple’s map program suggested a nice little “shortcut.”  The road tightened and suddenly because a one-lane switch back road.  As we climbed, I noticed ominous signs of huge boulders falling on cars.  My Navy Mouth surfaced in full force as the switchbacks tightened.  At one point, I peered over the edge and realized that we were on a tight cliff one lane road all by ourselves—we hadn’t seen any other cars in quite a while.  As a game, the girls started to count how many filthy words came out of my mouth as I executed turn after turn and got us safely off that road.

We finally pulled into the garlic farm around 9:30pm.  The tower was festively lit up with twinkle lights as Stanley Crawford greeted us.  He quickly showed us around and bid us goodnight.  That first day of spring break was tough to top!  I love those kinds of days where you get a small taste of everything:  family, adventure, laughter, exercise, relaxation and finally rest. 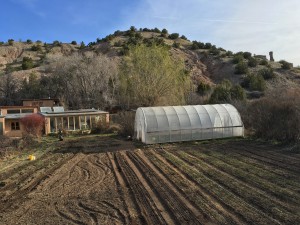 The next morning we awoke to a beautiful sunrise out of over the garlic farm and realized exactly what we had driven through the evening before.  We managed day trips to Santa Fe and Taos where we shopped the capital plaza for authentic Indian Jewelry in Santa Fe and hiked Taos’ Devisadero Peak Trail.  Stanley and his wife, Rosemary, were wonderful hosts and have honestly become new friends!  The girls thoroughly enjoyed many conversations with Rosemary and time with the new littler of half Cattle Dog pups.  It was amazing that we made it out of there without another addition to our family.

We arrived back home Tuesday evening narrowly missing a late spring snow storm and just in time to celebrate Ali’s 10th birthday together at home.  We look forward to our next big adventure together and wonder where we should head next.  🙂