Last Friday, I was looking forward to attending an inspirational event being put on by a good friend.  I had no idea exactly what I had signed up to do that evening—I just trusted that the training that Bill would provide would be well worth my time and money!  I first met Bill last fall just as my book was being released by Skyhorse.  He came to my first book event with the Academy Biznet.  Bill was an interesting fellow—ex Army Ranger / Westpoint grad + former Tony Robbins right hand man and now life coach.  I could tell that he was the type of person who rapidly assessed people.  He seemed to see right through me and asked me some interesting questions that definitely kept me on my toes.

The last time that I saw Bill, we had a long lunch where he introduced me to the wait staff as a “famous author” 🙂 and really helped me to set some intention and direction to the path in front of me.  Armed with that knowledge, I thought I was ready to take on this next meeting with “The Inevitable You” coach, author and speaker during his live event.  I really didn’t know the full extent of what I was in for… 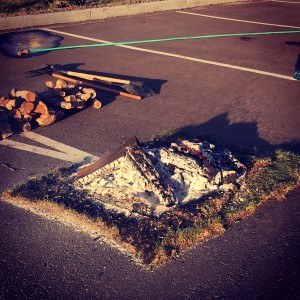 Where we sealed our intentions and the foundation for the fire walk.

Before we arrived, we were instructed to write down the things that we wanted to expunge from our lives and also the things we were hoping to bring into our lives.  At first, my response was a little guarded and vanilla…(I know, hard to believe that I would be guarded at all, right?!) UNTIL I got there.  Outside the hotel, there was a bonfire with a tribal beat playing.  I watched as people intently placed their slips of paper into the fire.  Their level of solemn conviction inspired me to revisit exactly what my intentions were.  In that raw, honest moment I took out my pen and decided that I needed to tangibly release the remaining hurt from my divorce and ex-husband, the hurt from the casino failure and the other hurts that had dotted my past.  And what was I making the space for in my life?  Abundance and love creating the life I’ve dreamed about but not yet claimed.  It was with that resolve that I scrunched my paper up and placed it within the coals and watched it smolder and burn into ash.  This reminded me of the Indian Smudging ceremony. 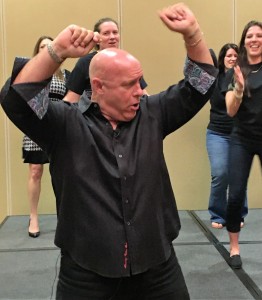 We were then told to head back into the conference room.  I was immediately taken aback by the thumping dance music playing and watched as Bill’s staff got down on the stage.  Within moments, they pulled ME up on that stage and I danced as if I were in a club not caring about what anyone thought.  The truth was that I hadn’t danced in a VERY LONG time…too long.  Dancing makes me happy!  I’ve missed it and completely embraced the opportunity to let loose a little before things got serious.

The music wound down and Bill started by saying that “tonight is about the fire within.”  I listened intently as he talked about the various rites of passage that we all experience in life—first date, first kiss, first job, graduation from high school, college graduation, marriage et.  My mind began to wander through my own rites of passage:  breaking the minute the first time in the 100 fly; making finals at Nationals for the first time and quivering at being on such a big “stage;” my first love; finishing Plebe year and climbing Herndon with my class; thrusting my cover into the air on May 25th, 1994 with my classmates as we graduated; earning my SWO pin; getting married; becoming a parent; getting divorced; getting published…and the list goes on.  Would this fire walk become another rite of passage for me?

My feet before the firewalk

He talked about allowing yourself to believe that you could do the unthinkable and to actually feel the desired outcome in everything, not just the impending fire walk, but in life in general.  I’ve always believed in goal setting and visualization—all the way back to my swimming days, but seem to have gotten a little rusty as I’ve aged with allowing myself to dream the big hairy dreams.  Bill instructed us to keep our heads up, walk normal and direct and chant “Cool Moss, Cool Moss.”  Before we went outside, we did a few dry runs in the room.  Once the real cool breeze hit my face, I was acutely aware that the game was ON.  There was a full moon in the twilight sky that evening.  Tribal music blared out of the speakers as we all clapped our hands to the beat and chanted “Cool Moss, Cool Moss.”  I began to feel adrenaline course through my veins as I watched Bill’s team load the walkway with bright red and orange coals from the bonfire.  I was confident that Bill knew what he was doing since he had done this thousands of times with Tony Robbins and later with his own coaching clients—RIGHT?!  As soon as the pathway was filled with the “ICE,” Bill stepped onto the small grass matt, took a deep breath and confidently walked across the coals.  He sure showed us how it was done! 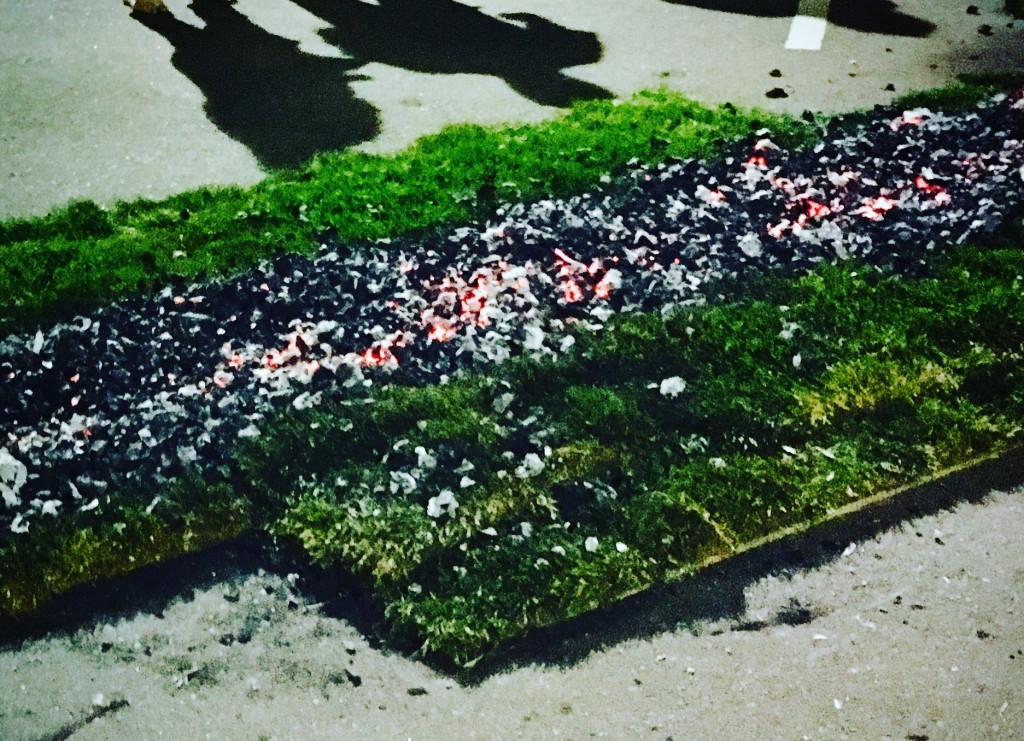 Check out the hot coals…we were about to walk across!

The instructions were to step into the cool grass pad where Bill would be waiting to assess the next person’s “state” to make sure that they were focused and ready to step onto the hot coals.  I watched as handfuls of people waited for the command to “GO” and then decisively stepped out onto and through the hot coals.  Some people walked very fast while others just seemed to saunter right through.  A team of people were waiting to catch you at the end of the coals where the “water angel” would quickly hose down your feet to help cool them off. 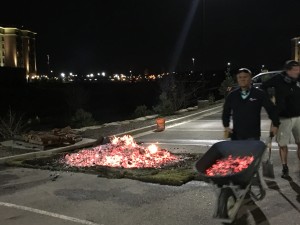 I decided it was time for me to jump into the line.  Just as the person before me stepped onto the mat beside Bill, he yelled out “MORE ICE .. MORE ICE” which was the cue for his team to reload the coals.  By this point my stomach was churning as I watched them fill the wheel barrow to the brim with new flickering coals.  Within moments, I heard Bill say “GO” to the woman in front of me and knew it was my turn to step up.  I dared not look down.  Out of my peripheral vision, I could see Bill’s bald head has he assessed my state.  “GO” he commanded. 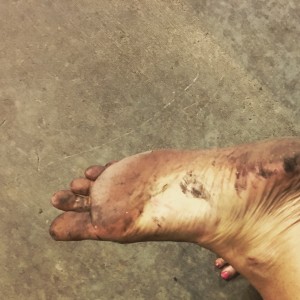 I looked at my angel team on the other end and quickly took my first steps.  I didn’t feel much of anything at first.  It felt as though I was stepping on popcorn.  “COOL MOSS, COOL MOSS” my mind chanted as I continued to step through the coals.  Was I going fast enough?  Would I make it to the other side?  With only two steps remaining, I started to feel a sting between my left big toe and the one next to it.  My angel team caught me and hosed me down.  I made it through the fire walk unscathed—with only two very small hot points.  No blistering.  I stumbled out of the line and into one of the volunteers who said that he was worried that I was losing my “state” those last two steps.  The truth was that I probably was losing it a little bit.  After the fact, I realized that I had been trembling within from the experience. 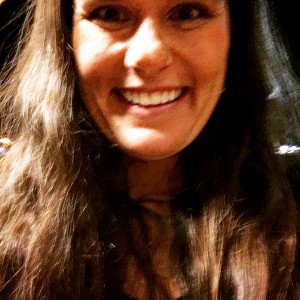 i TOTALLY just did THAT! 😀

I watched the rest of our group and then the staff make their way through the fire.  Towards the end, people even got a little brazen with some doing the waltz and other doing cartwheels through the hot coals.  I overheard one of the veteran firewalkers say that this was the deepest, hottest fire they had walked yet.  I smiled to myself with the realization that I HAD JUST DONE IT!

That night we were all UNSTOPPABLE.  It’s a feeling I intend to carry with me in all that I do.

Thank you, Bill and the Inevitable You Team!